Vacant Ritual Assembly #6 delivers flavorful and thematic content for Lamentations of the Flame Princess (LotFP). Or other OSR games. It is choke-full of grisly locations, adventures, encounters, and factions. And it comes with an interview that introduced me to another interesting old school game. You can buy the game for USD $5 as a PDF here (aff). PDF + print costs $10. 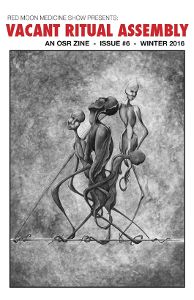 Spoiler Alert! First, you'll get Grigoro's Wonders Untold. It is a traveling circus full of weirdos. It comes with some background info that could add plot hooks for your players. But nothing very obvious. You have orange siamese yeti, a demon that is charmed by human society and the enslaved ghost of the owner. Next is an island adventure by Kathryn Jenkins called From Dunnholt It Rises. It has a dark tone and horror theme with the plague, rats, witches and an island's heart that can be eaten. I like the two evil factions that play against each other: the witches vs. The Good Doctor. But the adventure looks very linear, so that is a downside. Then there is a campaign hook plus a faction that players can join. Again of the macabre vein. The Gallows on Heretic Hill and A Light in the Black detail an interesting in-world-justification for "resurrecting" players as undead agents. That helps mitigate the mortality of old school games. And it offers a way to send players on missions for the faction, the Noosefriars. You'll also get a mansion crawl by Kreg Mosier, Death Planted the Esther Tree. I love the pretty maps and the adventure premise. A cursed demon tree that was once the household's daughter and now wants revenge. There is also a curious illness: the Ebonwood Rot which transforms you into an Ebonwood Tree. It would be devious to confront your players with this... The zine also features some monsters and weird encounters: The Grimsly Hill Cherubs and The Lathnos Sugar Cane Crop (by Anxy P.). Every issue of VRA has an interview. I know that some people have no interest in that. But I found them mostly worth reading. This one has a conversation with Emmy Allen. She wrote a game that was unknown to me. Wolf-packs and Winter Snow is a prehistoric fantasy game with influences of LotFP, Warhammer Fantasy and ACKS (Adventurer Conqueror King System). It also has random world generation. That sounds mighty alluring to someone like me, so I'll need to check it out.

The paper quality is much better, one of my main gripes with VRA. Layout, font choice, boxed text make this easy to read. Nice artwork round up the appealing production. Like many zines, this is not a fancy art book but a good looking minimalist booklet nonetheless.

VRA zines are always a delightful read of the bizarre and gruesome kind. This issue lives up to the high quality of the previous copies. It even has more content than before. Even if you don't use all the material, there is something you could use. I find that most entries are easy to insert into your campaign if you like the tone.Links:
VRA #6 (aff)
Red Moon Medicine Show
Wolf-packs and Winter Snow PDF (PWYW, aff)P.S. Reviews of previous issues can be found here.