Sig: The City Between, a Kickstarter for the Spark RPG

What do you need to know?

Sig: The City Between is a multiplanar city supplement for the Spark Roleplaying Game. The Kickstarter runs till Sat, Oct 31, 2015, 4:00 AM CET.

There is only one true city; a place of multiversal trade, cultural exchange, and mixed blood. A place where monsters come to scheme and gods come to die. Sig: The City Between is the nexus of the multiverse. It's a city connected to everywhere, a refuge for the oppressed and a prize for tyrants. It's a place where culture is at the forefront, with diverse faiths and tongues struggling for space in the crowded metropolis. It's a city of families, both whole and broken.

Jason already has two crowdfunding projects under his belt: the first one was for the Spark RPG in 2013 and the second one was for the ENnie-Award winning Posthuman Pathways in 2014. I backed both of them and I'm glad that I did. Jason always managed to deliver high-quality products and went out of the way to provide a good user experience (he created tuck boxes for Posthuman Pathways after the KS and shipped them individually). I wrote a blog post about the Spark RPG beta in 2013 but here's the gist: a very interesting, storytelling game with innovative mechanics like competitive scene framing, strong mechanical ties to your Beliefs and one of the best methods for world building. (In my blog post I complained about the many examples and that some of the procedures weren't clear to me, in hindsight this criticism is moot with the completed product. Also, while the GM chapter wasn't new to me, it's nonetheless a good reminder and a nice summary for others.)
Please take a look at the free PDF A Spark in Fate Core (aff) for the world building method for Fate Core. I need to be honest, I still didn't manage to playtest Spark. Still, it's worth buying it for reading purposes only.

On the one hand, it's an expansion of the Spark RPG with revised content that you can use in every Spark game. On the other hand, it's a setting book for a Planescape-similar city. (I am not familiar with Planescape so I can't compare, sorry.)
You'll get most of it if you use it in conjunction with Spark. One of the Kickstarter reward levels lets you buy the core game if you don't own it yet. Still, a lot of the content is not rules-specific so if you want to have some inspiration for another game engine, you might still find Sig useful (caveat below).
If you back the project you get access to an 113 pages beta draft which already looks very complete. There is lots to digest and the setting is very evocative and colorful but it is painted in broad strokes. For example, there are no maps or detailed locations. As an expansion to Spark, the game comes with some rules changes, the most obvious a new attribute called Smoke. In the original game, there was an attribute called Spark (next to traditional attributes like Body, Mind, Heart). Spark conveys dramatic influence and helps you frame scenes.
In Sig, a variant is used: instead of Body, Mind, Heart and Spark you only have two attributes: Smoke and Spark. Spark represents the physical, social and intellectual actions and is also used for conflicts. Smoke represents the players' influence on the game setting. As you can see, the game has moved more towards the meta aspects of the game and is even geared more towards a storytelling game than a pure role-playing game.
Furthermore, there are now Interlude Scenes and other small rules tweaks. Like in Spark RPG, the game has a strong setup where character creation is tied into setting creation. The city of Sig is always connected to three of the fifteen available Planes. You can either choose which are the starting Planes or roll them randomly.
There are five inner Planes (the Elemental ring: Flame, Waves, Wind, Stone, Ice), three outer Ideological Planes (Justice, Tyranny, Destruction, Order, and Freedom) and finally five Planes in the middle (conceptual Planes: Dreams, Shadow, Lore, Life and Death).
The city also has portals and other gateways to the different Prime Worlds which are the "normal" native worlds and allow you to plug in other settings.
The normal method for creating Prime Worlds asks you to use the setting worksheet in the core rulebook, but there are also shortcuts available: 15 short setting descriptions for worlds like Wasteland of the Mind or Hardspace Empire.
(I'm a bit confused about the mentioned included setting Beliefs as I can't find them in the description, though.)
Every Plane comes with a strong theme/Belief, factions, NPCs, and locations. Again, while the writing is distinct and inspiring, the actual facts are a bit sparse. Although the descriptions are very intriguing, they can only provide a starting point. In my opinion, the book could use some more details concerning the Planes and also the Prime Worlds. I also would have liked to see artwork for some of the new species. There are several new unique races that either don't have pictures or have public domain xylography. I'm not sure if the art will be replaced with artwork funded by the crowdfunding effort, but I hope so.
Again, the combined world building procedure and character creation (using factions, cultural backgrounds, relationship ties etc.) are a very strong argument for giving this product a look. 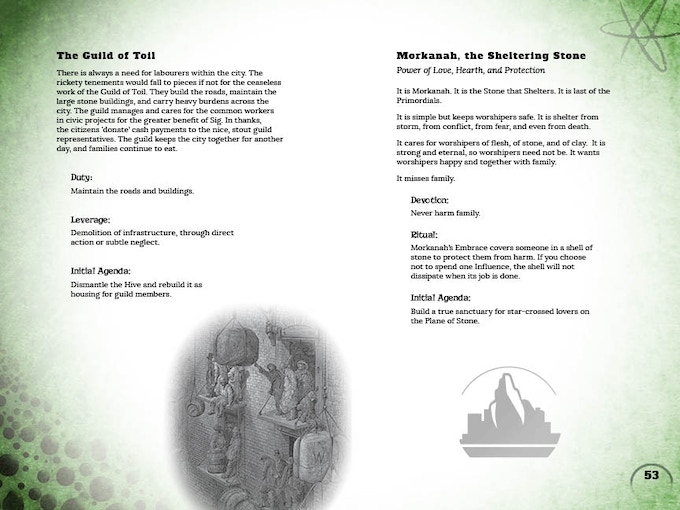 example from the KS page Visually, the PDF looks appealing and you can see that the author has learned from his previous works. The product is a full-color work and makes excellent use of color coding the different chapters and Planes with background colors and imagery. The three types of Planes all have a different colors which make it easier to navigate the book.
Additionally, I'm very impressed of the use of icons in this book as they look pretty awesome.
The artwork itself is a mixed bag. The cover image looks very nice and parts of it is repeated in the book. Other than that, there is a lot of public domain art/xylography which isn't pretty and sometimes doesn't fit the specific theme.
The layout is serviceable and the text is good to read. I personally don't like the swirly font which you can see at the Kickstarter page and which is also part of the book (albeit a small part). I find it difficult to read.

Sig: The City Between looks very interesting and definitely has something to offer: for Spark RPG players there are new expanded mechanics and another strong emphasis on world building, and for everyone (else) there are lots of setting ideas and snippets which can inspire you even if you don't use Spark RPG. However, the setting information is given in broad strokes, so you should definitely check out the beta document to see if it's enough for you if you don't use the associated RPG system.
Jason Pitre's Kickstarter track record is superb, so I encourage you to take a look at this project if you like multi-planar settings.Links: Sig: The City Between Kickstarter Spark Roleplaying Game (aff)