Bookkeeping Notes: I get commissions for purchases made through links in this post. DrivethruRPG’s top selling product is the Index Card RPG Core by Runehammer Games. The PDF costs USD $16.50, other formats available, too. The author, Hankerin Ferinale, is a cool dude with a popular Youtube channel. He has extremely good ideas on how to streamline D&D, so it’s easy to learn and easy to game master. Here is a blog post summary. The Index Card RPG Core is the distillation of all of Hankerin’s experiences. It is a lightweight rules system with some neat ideas. 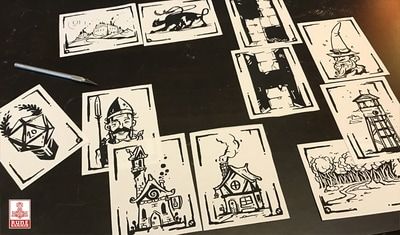 The name is a bit of a misnomer. The game doesn’t use cards per se. At first, Runehammer Games released two sets of cards with props, traps, monsters etc. - Index Card RPG Vol. 1 and Vol. 2. They came without a ruleset. Now, ICRPG Core is designed with these cards in mind. They are especially useful for game prep or visualization of the game space during play. But you don’t need these cards. What about ICRPG Core? I won’t get into detail here. At its heart, it uses time restraints to achieve a sense of urgency. The game has a strict turn order. In combat, turns take seconds. Out of combat, they last longer (hours or days). But everything is in turns. And there is only one action per turn per player. Almost every bigger task works with an attempt-effort-mechanism. It’s like a fight in D&D. Roll to hit, roll for damage. It’s the same here. A task has “hit points”. You roll an ATTEMPT against a target number. You roll for EFFORT to accomplish your task - step by step. And because of the strict time management, that even seems to work. Anyway, what I like most about the product is not even the game system itself. No, it’s the approach for the Game Master. There are many great concepts for building encounters, game prep, scaling challenges. That part of the book makes it worth the price alone. But let’s do a simple playtest. Index Card RPG Core has some trial runs. You make a character and play these mini-scenarios to get familiar with the system. There are two world primers/settings. Alfheim (fantasy) and Warpshell (sci-fi). Classes are tailored to the setting, but you can also mix and match. I wanted to play a Mage and I’m using the first fantasy challenge. Here is the character:

The Red Mage is master of a thousand horrors, and not all go as planned. It is a freak lightning strike that starts the fire that night, and from the burning abbey, you run like rats. Guards shoot you down, the fire consumes, and many of the half-human souls from that secret hell never make it beyond the wall. A few, though, are up to the challenge and made mighty by The Red Mage’s blasphemous experiments. You are one of those lucky, brave few.

Target 10. Two Archers at FAR range ahead. Each is a 1 HEART challenge. Eliminate them or reach FAR range beyond them to overcome. Round 1:
Ruuk dashes along the hall with its broken pews, trying not to stumble. DEX check vs. 10 - fail. He only makes it a few feet until he has to regain his balance (NEAR distance). He can’t reach the Archers in this round (FAR distance).
The Archers fire at him - 1 and 9, misses. Round 2:
Instead of engaging the Archers, Ruuk tries another dash - 17, success. He now is in NEAR distance beyond the Archers. Archers: ranged attack - one miss, one hit, 2 damage. Round 3: Ruuk flees. 8 HP left.

Target 12. Fellow prisoners waver and drop as they enter a field of poison flowers. A mossy, locked gate bars your path. Climb or unlock it, a 1 HEART challenge, making a CON Check each turn or taking 1D4 poison damage. Ruuk tries to climb it, he doesn’t have any tools to unlock the gate. Roll of 12, + 1 bonus - success. Basic effort (d4): 3 CON check: 17, +1 - success. Fuuuuuck. Ruuk doesn’t make any progress. And he also cannot withstand the effect of the poison - 4 damage. Coughing, he stubbornly clings to the bars and heaves himself up (16 - success). Basic Work: 3, still 4 points of effort left to succeed in this task. He barely manages to resist the poisonous effects (roll of 12, +1 bonus (13) vs. TN 12). Yet another try but without success. But Ruuk is determined to escape and won’t submit to the poison flowers. Some more inches till freedom (18 - success). He is so focused on his task that the poison cannot take an effect (natural 20). But his strength is waning (10 - failure). A dwarf may be sturdy but his time in this prison has taken its toll (CON check 7 - fail, 2 damage). He barely makes it over the gate (attempt at 16 - success, but only 2 HP left).

Beyond the gate you stumble, barely alive. Looking back reveals a great column of flame, and you are faced with freedom. What will you do?

Easy rules, good flow. Deadly game. ICRPG is worth another try. I love character creation. The classes are iconic. Still, the stats and loot allow for some interesting customizations. Perhaps I should have tried to kill the guards in the first room. Each successful attempt would have done 1d8+3 damage. Still, outrunning looked to be the better choice. Magic works just like everything else, so I would have to first try to hit with my Arcane Missile (INT check with +2 bonus) and then whittle down the Archers’ Hit Points. There is no limit on how often I can cast. No weapons or armor restrictions. Interesting.

P.S. Here is the DTRPG Link again. The PDF costs USD $16.50, softcover $11.50 (without PDF), combo $19.50. Hardcovers also available.
The cards (Vol.1 and 2) are hawt, too. And they are generic. So you can use them even if you don’t want to use the ICRPG rules. P.P.S. Don’t forget to check the YouTube channel. There are also some videos about the game if you are interested.