I Hit It with My Swiss-Army Hand: Hubris Review

Legend states that Hubris was created from the fetid corpse of a long-dead god. Hubris is a land of terrible creatures, grand inequality, strange and cruel gods, dangerous magic, opulent nobility, destitute commoners, people that have become corrupted and turned to savage beasts, constant wars, and worse.

What exactly is Hubris? It is a weird fantasy setting book for DCC RPG. DCC RPG is one of those games filled with crazy stuff and Hubris fits it like a glove. I imagine that the Hubris setting sprung out of Mike Evan's psychedelic dreams. It's weird, it's trashy, it's hilarious. This whopping mammoth clocks in at 350 pages for $14.99 (PDF). A print edition is in the works. Get it here: DTRPG or RPGNow.

Hubris has new occupations for level-0-characters (DCC), new classes and new races. Alchemists can brew potions and make chemical bombs. They can transform themselves into monsters with the help of a mutagen. Blood Witches have familiars and can coagulate your blood. They can even transport themselves through your blood. Gross. There are savage Druids. And there are Shadowdancers who are the ultimate assassins. Avarians are bird-like tricksters and scoundrels. Ekrasks are fierce lizardmen who can shoot blood out their eyes. Half-Demons are outcasts with infernal powers. They try to combat the lure of demonic corruption. Murder-Machines are like World Of Warcraft's Death Knights turned up to 11. These poor souls are trapped in a suit of armor to serve as the Black Queen's machine men. You have a swiss-armor-hand and can "Punch Them in the Face" with your metal fist. Mutants can have feet like flamingos or might change their sex when they get wet. But some mutations also give them powers like telepathy, an extra heart, worm infested skin or regeneration.

New options. You can sacrifice your shield or choose class damage instead of weapon damage. You might want to use quick starting gear. There are new weapons like the spiked chain or the wheellock rifle. You get new alchemist items and other tidbits. What does it say about this book that there is a table for quality of prostitutes? It fits the theme of the book.

The meat of the show is the ten new territories.

The territories of Hubris are all set up in the same format: quick summary of the area, a d100 chart of the Lay of the Land, a d100 chart of encounters, and then it moves on into a brief description of a few interesting locations (and sometimes other pertinent information, such as charts and tables unique to this territory).

Here you'll find a weird fantasy/steampunk/post-apocalyptic/sci-fi hodgepodge. Swamps, deserts, canyons, tundras, forests, mountains and more. Kitchen-sink and a bit over the top but full of charming ideas. Player characters might encounter the frozen mummy of a small child, find crystalline cubes or the Ever-Shifting Prismatic Summoning Stones. Gruesome illnesses might plague them. They might battle orcs that use giant tunneler abominations as vehicles. As a Game Master, it is like I asked for a toolbelt and got a fully stocked workshop.

Spellcasters will be delighted to see that there are tons of new toys for them. A wizard's spellbook ain't a garden-variety book. It has a personality (extremely vain or cranky), quirks (screeches when fish are near), a special ability and a certain look. My favorite spell is Summon From The Void. You can roll on a table called "What the Hell did I just summon?" and might get a pus leaking Giant Stomach With Gnashing Teeth and Black Orb Eyes and Baby Heads. What?! The patrons and deities are as strange and trashy as the rest of the book. Hubris is not nice and they aren't either. You'd rather not meet the Floating Island of Terror which rains soot and pollution. Drallic the Flayer Of Flesh also doesn't sound like a nice fellow.

Strange and interesting herbs? Gravedigging table? Tavern and Inn generator? Diseases of Hubris? What’s in a vial? Check. The book doesn't leave the GM hanging without inspiration and gizmos. There are tons of tables with flavorful entries and adventure plots.

The magic items of Hubris are not exactly friendly items; these are things from a bygone age. The ability to craft such wonders has been lost.

Creating magic items follows the DCC rules. Still, there are some items and artifacts like The Demon Tongue or The Armor of the Horned Blood Crab. Like everything else in Hubris, they are fucked-up. You’ll also get 51 new monsters and two example adventures. Ever wondered what is on the dead body of a monster? Mike Evans got you covered. I don’t know why a Bogwitch would have a vial of boogers but perhaps your players will find out. The adventures highlight the strangeness of the setting. For example, the Level-0-Funnel is called “It came… From Outer Space!!!” and has a spaceship and advanced technology.

Thumbs up. Hubris is a useful toolbox and a crazy setting. Even if you don’t like everything, you can pick and choose. Hubris can be great fuel for your campaign either way. P.S. Here are the links again:
DTRPG and RPGNow (affiliate).
Also, check out Mike's blog. 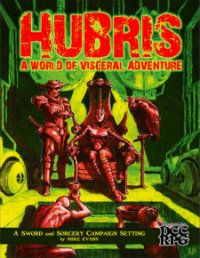