A Noob's Perspective on Heroquest and Glorantha

Do you have a preferred game system? Something to fall back upon, something which is (almost) perfect for your gaming style? That doesn't mean you don't try out new systems or enjoy other games, but you have the ONE game engine which you can rely upon. I don't. And I'm still searching. And that search will probably be fruitless because there is no perfect system. I really enjoy reading gaming books as I love the thrill of learning a new system and finding out what new and interesting mechanics are out there. However, I would really like to have a reliable "backup" system which I can use on the fly. I'm not a great fan of simulationist systems (perhaps with the exception of old-school D&D which still leaves some gaps for me to fill out) but prefer lightweight, narrative/indie games. Also, I like generic systems. When I have a setting in mind, I just want to play and don't want to fiddle around with adjustments.

So, in my fruitless search for the perfect™ game, I stumbled across Heroquest 2 (HQ2). It's a game developed by Robin D. Laws in 2009. The HQ2 rules are universal although they were written with the setting of Glorantha in mind. In fact, at the end of the book there is a section about playing in Glorantha. I originally wasn't interested in Glorantha. It's a fantasy setting, what gives? The HQ2 rules are available in English and German. I wanted to give the German fan project a try because I like it when people make things available in my native language. The cover looks horrible and I have to hide it from my young daughter because it looks creepy, but I ordered it anyway.
Unfortunately, the book doesn't do a very good job at explaining things. I find the organization and the countless different examples confusing. Also, there are minor translation issues.
I've heard that Heroquest Glorantha (HQG) had been recently released and that it is called HQ 2.1. Examples are cleaned up and it's more tied to the setting. Annoyingly, it's almost impossible to get the physical book in Europe (I think only Finland has a store which carries it). You can buy the PDF, though.
Visually, the book looks better and is also better organized. Moreover, the examples and explanations are cleaned up and streamlined. Still, it's a bit hard to master. This game is way easier to learn from an (experienced) Game Master than by reading the book. At its core, HQ is a very narrative and rules-lite system. For the Game Master (called Narrator), there are some bells and whistles and a lot of tables which made it a bit confusing for me. But for the players it's a pretty straightforward system which gets out of the way during gameplay.
Obviously, Laws borrowed some ideas from the indie movement of the 2000's. In my book, that's a good thing. Player Characters have freeform Keywords and Abilities. The system tries to emulate literary fiction and not realistic simulation. The game uses conflict resolution instead of task resolution. Meaning, you need to frame a contest (What's at stake? What is the whole conflict about (i.e. "Can we defeat the opponent in a physical combat?")?) and then you resolve the whole enchilada instead of adjudicating every single ability check ("Do I hit the monster?"). What I like about such a system is that it doesn't differentiate between combat and other types of conflicts like many traditional games.
HQ is not as cutting edge as some newer systems and player empowerment is limited in comparison to Fate and Cortex Plus, at least per RAW (rules as written). Still, I don't really like Fate's compel mechanisms and I don't like to tweak my needs to Cortex Plus (which is even more of a toolkit than a ready-to-go-system). Heroquest does the job I want it to do out of the box. The freeform Keywords make it easily adaptable to different genres without fuss. It's missing some dice tricks or cool tactical options, though.
Additionally, the Pass/Fail Cycle which was implemented to simulate the ups and downs in a story is a wonderful tool for the Game Master. It can help to keep up suspense but shouldn't overrule common sense. Plus, for solo play it's golden as it can be used to emulate the Game Master. 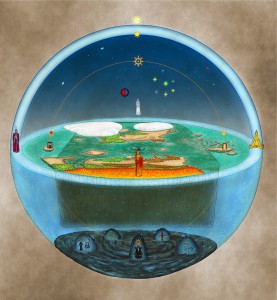 While digesting the rules for HQ, I discovered a rich and flavorful sword & sorcery Bronze/Iron Age setting.
Glorantha can be very intimidating for new players. It's one of the oldest RPG settings, created by Greg Stafford in the 70s and developed over decades by him and others.
What I particularly like about Glorantha is the vibrant mythology, the omnipresence of magic as well as the absence of Tolkienesque tropes. (Here is a primer on Glorantha.)
In Glorantha, magical runes play a huge part. They are tied to the different gods and every player character can easily wield magic by joining a cult. A worshipper can access the runes that the God is associated with (for example Orlanth Thunderous has the Air rune and you can create a lighting spear). Other than that, there are other magical schools like animalist magic/shamanism as well as sorcery and the magic of the Illuminated.
Players have a wide range of different cultures to choose from with various backgrounds. Still, as a newcomer to Glorantha I find it the setting a bit hard to approach because of the abundance of material. Some of it is buried in old publications and fanzines which you can't buy anymore.
Moreover, it's a bit confusing that Glorantha was once tied to Runequest and then later on to Hero Wars and then Heroquest. There are editions of Runequest (e.g. Runequest 2) which come with Glorantha and then some which aren't (e.g. the new Runequest 6).
For a neophyte to Heroquest and Glorantha, the Heroquest Glorantha core rulebook does a very good job at providing the basic setting information. Furthermore, there are world books like Sartar: Kingdom of Heroes, the Sartar Companion and more. Additionally, there is the brand-new Guide to Glorantha which is system-neutral and very exhaustive. But when I wanted to buy these gaming books as hard copies, I encountered a problem. The publisher, Moon Design Publications, still hasn't established a distribution network outside of the US. I ordered the Heroquest Glorantha rules from my shop in Germany, but the owner told me that he doesn't have any news on when it will arrive. And he doesn't know if he can get the Guide to Glorantha. I have to wait for the reprint in 2016 and can only buy the PDF version right now.

So, what are my first impressions digging into Heroquest and Glorantha?

Pros & Cons of Heroquest and Glorantha

Is Heroquest the perfect gaming system?
Of course not but it comes close to being a perfect system for me. It fits my preferences of being rules-lite, narrative and versatile. And I was positively surprised by the setting of Glorantha as it feels fantastic but slightly different than "standard fantasy".
Heroquest is admittedly a game for a certain type of player (those who like abstract mechanisms and a focus on narration instead of simulation) and for others it will probably fall short. And the drawback of the vastness of Glorantha's universe is that it can feel like quite a task to get a handle on it. The Heroquest Glorantha book gives you the basics, but you'll probably want the Guide to Glorantha as well (and the PDFs for Vol. 1 & 2 will cost you USD $49 which isn't exactly cheap but still a very reasonable price for all the content).
But all things considered, I'm glad that I took the plunge and I am looking forward to the physical books (in 2016?).Links: Heroquest 2 English & Heroquest Glorantha Heroquest 2 German glorantha.com